In editions of the CATHOLIC CHAPEL HYMNAL there is a reference to a national survey conducted by Extension Magazine in 1947 of the ten most popular Catholic hymns. This is a short story about this survey and the beautiful hymn Ave Maria, Bright and Pure. The CATHOLIC CHAPEL HYMNAL is a unique collection of Catholic hymns approved by 118 Catholic Chaplains in the Armed Forces during World War II and was published by McLaughlin & Reilly from 1944 thru 1968.

Adelaide A. Procter (1825-1864) wrote the words to the hymn Ave Maria, Bright and Pure. It appears in her book A CHAPLET OF VERSES, 1862. There is a note by the author in the contents of this collection that indicates some of the poems were written 20 years earlier and only three have been previously published. So, it is possible this poem was written as early as 1842. Adelaide was born in 1825 and was a prolific poet, philanthropist, and a soul of good charity. She labored extensively helping the homeless and unemployed women of 19th century England. Her first poem submitted under the pseudonym of Mary Berwick, was published in a weekly journal Household Words whose principal editor and publisher was Charles Dickens.

Adelaide converted to Catholicism in 1851 and it was this and what she saw around her that heavily influenced her poetry. She was a highly educated woman for her time fluent in German, French and Italian. It is said that she was Queen Victoria’s favorite poet. In 1862, she contracted tuberculosis because of her tireless work on behalf of suffering women. She struggled against this illness for 15 months and died at the early age of thirty-eight. Adelaide was the author of several books of poetry including Legends and Lyrics and a Chaplet of Verses. Many of her poems were composed to hymns like How Pure, How Frail and White and Of All The Queens In Month Of May.

In my search for melodies, I could only find two for Ave Maria, Bright and Pure. A Sister of Notre Dame composed the first melody. It first appeared in MAY CHIMES, 1871, a hymnal compiled by the Sisters of Notre Dame of Cincinnati, and it was captioned Ora Pro Me for duet. It appeared in other Catholic hymnals including PETERS’ SODALITY MANUAL, 1872 and 1914; in MAY BLOSSOMS, 1872, the MANUAL OF SELECT CATHOLIC HYMNS, 1885 and 1925; LAUDIS CORONA, 1880; the ST. BASIL’S HYMNAL from 1906 to 1925; ST. JOSEPH’S HYMNAL, 1930, and HYMNS USED BY THE PUPILS OF THE SISTERS OF NOTRE DAME, 1921 and 1948. All of these hymnals use the melody composed by the Sister of Notre Dame. Since it was a customary practice in many religious communities not to give credit to individuals but the whole community, the identity of this sister remains hidden.

Oscar Weil (1839-1921) composed the second melody, and it was published in Boston by the Arthur P. Schmidt Music Company in the year 1880. It was published as sheet music only and never appeared in any Catholic hymnals. Oscar Weil studied music in Germany and Paris the violin being his instrument of choice. While he was overseas studying, the Civil War broke out in the United States. He returned home and enlisted in the U.S. Army. He rose to the rank of major, decorated twice for bravery and suffered a severe injury to his hand during one of many battle engagements. He retired from the Army, traveled to Germany, and resumed his musical studies earning a teaching degree in music composition. He returned to the United States and settled in San Francisco where he helped to establish the San Francisco Institute of Music. He composed several operas, choral pieces, piano works and was a regular contributor to the San Francisco newspaper Argonaut as a music critic. He died in 1921 having suffered a series of heart attacks.

The contest was announced in the November issue 1946 with a deadline for submissions by November 20. The contest rules were simple, name your favorite Catholic hymn and tell in not more than one hundred words, why this hymn is your favorite. If there are several versions of this hymn, you need to specify the composer. The winner wins an all-expense paid trip to Chicago to appear on a cost-to-coast hook-up of the famous radio program HYMNS FOR ALL CHURCHES, heard daily throughout the country through the facilities of the American Broadcast Company. The deadline was extended until December 20 due to the tremendous response of readers.

In the February issue 1947, an announcement was made for the HYMNS OF ALL CHURCHES radio program. Choristers will sing the hymns from the results of the contest scheduled for Feb. 7, 1947, readers should check their local newspapers for radio times. In the April issue 1947, the winner of the hymn contest was announced and a list of the ten hymns voted the most popular. The winner was Mrs. Mary E. Wieland who came from a small town in the heart of Kansas. The Extension judges chose Mrs. Wieland not for her hymn Ave Maria, Bright and Pure, but for her letter explaining why it was her favorite hymn. Mrs. Weiland writes:

For years I sang alto in our small choir. We had four children: Albert 18, Joe 16, Jackie 11, and Mary 6. They were everything a mother could wish for. Many times, I would wonder why I was so blessed with happiness. One day, Jackie while playing with a penny balloon, inhaled it. After working two hours, we found it useless; Jackie was gone. At his funeral, the choir sang Ave Maria, Bright and Pure. After that day it had a new meaning. I felt that Mary, the Mother of God, surely could understand my mother-heart. So, I tried to imitate her and accept my loss as she would, knowing she would help me. Three and one-half years later, Albert, a test pilot, crashed. Again, as I would hear Ave Maria, I would feel new hope knowing she would care for Jackie and Albert. One and a half years later, Joe, a navigator, was reported missing over Belgium. For six months we still hoped and prayed for his return. During that time, I’d plead to our Blessed Mother to intercede for him. Then the final word came, Joe was with Albert and Jackie. Now as I hear Ave Maria, Bright and Pure, I can vision our Blessed Mother with my three lovely sons, happy in Heaven.

Though Mrs. Wieland chose Ave Maria, Bright and Pure as her favorite hymn, the ten hymns which received the most votes were listed according to their popularity.

The combined versions of Ave Maria rated highest in the number of votes received but since it was a rule of the contest that, if a hymn had several versions, the composer must be specified, the votes for the various versions of the hymn were tallied individually. The submission ballots and letters from listeners of their favorite hymn(s) do not exist anymore. By 1950, subscriptions for the Extension Magazine had reached more than 600,000.

I think you will agree Mrs. Weiland’s letter is quite moving and inspirational even today. The melody by Oscar Weil is a beautiful arrangement that I came across by chance. I often wonder if the Blessed Mother is guiding my hand and would like a certain melody or story to be known again. There is not much I can offer as a reflection for this hymn more then what Mrs. Weiland has already said. She was deeply touched by the verses of this hymn and was nourished by them as she struggled with the loss of her sons.

This would be a wonderful hymn to sing before mass, during offertory or communion especially on Marian feast days.

Don’t underestimate the providence that can come from hearing these beautiful traditional Catholic hymns. Like the Prodigal son who was lost and is found, these hymns have been lost to us and have been found.

I would like to extend a special thank you to Catholic Extension for their help in locating the magazine issues featured in this story. Also, to Library of Congress, Music Division for the music by Oscar Weil.

You can play all of the hymns below.

These are computer generated sound files. The tempo is approximate but should provide the listener a good sense of what the hymn sounds like. All the hymns are in the public domain. Music directors, if you use any of these selections in your Sunday or weekly music programs and you make a recording, contact the author and I may feature it in the What’s New section of the website. 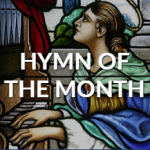 I’ll Sing a Hymn to Mary