Father Jeremiah William Cummings, D.D., (1814-1866) wrote the text of this hymn for the Feast of the Assumption. It first appeared in his SONGS FOR CATHOLIC SCHOOLS AND AIDS TO MEMORY FOR THE CATECHISM. The first edition was published in 1860 by P. O’Shea and contained sixty hymns. The second edition was published in 1862 by J. & D. Sadlier and contained ninety-two hymns. One of the hallmarks of Father Cummings hymn book was the attention given to the education of school children which focused on Catholic fundamentals like the Ten Commandments, the Seven Sacraments, and Theological Virtues and adapting them into hymns. These two publications are quite significant and until 1860, the only Catholic collection of original hymns, the first of its kind, by an American author.

Father Cummings was born in Washington, D. C., and after his father died, he and his mother moved to New York City. From a youthful age he wanted to become a priest, but he and his mother were as poor as church mice. In September 1834, and through the good graces of Father J. P. McGerry of the New York Archdiocese, he was accepted to the College of the Propaganda in Rome. He was a gifted student and gained the degree of Doctor of Divinity. He returned to New York and was assigned to St. Patrick’s Cathedral and later he was appointed pastor of the new St. Stephen’s Parish where he oversaw the building of the church and school. He had a great fondness for music, and soon took charge of the choir. Oftentimes as were the case, well-known singers from the Metropolitan Opera House joined the choir. Through his influence the choir gained the esteem of the people who came from all over the city to Sunday High Mass. St. Stephen’s Church became one of the largest Catholic parishes of the day with over 28,000 parishioners. Father Cummings remained pastor of St. Stephen’s parish until his death in 1866.

Father Cummings was one of the first American Catholic hymn writers with over ninety original hymns to his credit. He is referred to as The Forgotten American Hymnodist in an article written by Monsignor Hugh Thomas Henry (1862-1946) that appeared in THE CATHOLIC HISTORICAL REVIEW, Vol. 1, No. 2 (Jul. 1915), pp. 139-147. Some of Father Cummings hymns which achieved popular success include, Christ is Risen from the Dead; O Brightness of Eternal Light; Let a Pious Pray Be Said; Great God, Whatever through Thy Church; Daughter of God the Father, and Most Holy Trinity One God. Father Cumming’s Christ is Risen from the Dead was a favorite Easter hymn when I sang in St. Mary’s Choir.

One of the first melodies to appear in American Catholic hymnals was composed by Signor Domenico Speranza (ca. 1860). He was a highly respected Italian composer known for his system of musical instruction for the children of Turin. He was a professor of vocal and instrumental music and the Director of the Italian Musical Institute in San Francisco. He was also connected to the Academy of Music in New York City. Father Cummings chose him to prepare the music for the hymnal SONGS FOR CATHOLIC SCHOOLS, and with the exception of five of the hymns, Signor Speranza composed all the music in the first edition.

A second melody appears in the CATHOLIC VOLCALIST, and in the CATHOLIC YOUTH’S HYMNAL. The CATHOLIC VOLCALIST was a Catholic periodical of the 1860s made up of Sacred Music including litanies, anthems, motets, hymns, for the use of churches, schools, and private families. The Christian Brothers of New York compiled the CATHOLIC YOUTH’S HYMNAL. The Brothers were a mix of German and French backgrounds and taught in the Catholic schools surrounding St. Stephen’s Parish. Around twenty-five of the hymns were composed by the Brothers and fifteen melodies were composed by Father Louis Lambillotte, a French Jesuit priest (1796-1855). Father Lambillotte is best known today for his compositions Come Holy Ghost, Creator Blest; On This Day O Beautiful Mother, and ‘Tis the Month of Our Mother.

A third melody appeared in CATHOLIC HYMNS AND CANTICLES and THE COMPLETE SODALITY MANUAL compiled by Father Alfred Young, C.S.P. (1831-1900). The composer of this melody is not known although in the Preface of both hymnals several individuals are mentioned for their contributions to the hymnals but a special thank you is given to T. J. Wallace, Esq., organist of St. Paul the Apostle Church located in New York City for his contributions.

During the early part of the twentieth century the hymn was adapted to a tune from Bone’s Cantate, 1858 and appeared in the Catholic hymnal PSALLITE, Father Hacker’s CATHOLIC HYMNAL and the ST. MARY’S MANUAL. The tune is known as Wie schön scheint die Sonn (time index ~ 2:30)

Among the several melodies that were composed for this beautiful hymn the melody that achieved the greatest success was by Sister Mary Alexis Donnelly, R.S.M. (1857-1936) of the Order of Mercy, St. Xavier’s Convent, Providence, RI., Her composition was published by J. Fischer & Bros., in song sheet form and by McLaughlin & Reilly, Co., in their hymn-pamphlet No. 25, HYMNS TO THE BLESSED VIRGIN MARY published in 1906. This hymn pamphlet and others that featured her musical compositions appropriate for various occasions or use proved to be an enormous success for McLaughlin & Reilly and were sold continually during the company’s existence. This arrangement also appeared in OUR LADY OF MERCY hymnal published in 1899 and OUR LADY OF MERCY Vol. 2 published in 1927. Both of these hymnals were compiled by the Sisters of Mercy with music by Sister Mary Alexis Donnelly. It also appeared in the STANDARD CATHOLIC HYMNAL published by McLaughlin & Reilly, Co., in 1921.

When I meditate on the verses, I can see several allusions to biblical passages in the hymn. For example, thy throne is in heaven, thy Son is its King, a reference to Psalm 45:10, the Queen takes her place at your right hand in gold of Ophir. The Mystical Rod pointing to Isaiah 11:1, a shoot shall sprout from the stump of Jesse. Also, the Handmaid of God a reference to Luke 1:38, Behold, I am the handmaid of the Lord, and again the sun with its rays calling to mind Rev. 12:1, a woman clothed with the sun, and we bless thee, from Luke 1:48, all generations shall call me blessed. I also see a reference to John 19:27 in the phrase Oh be thou our Mother. Each person who reflects on these verses will see something different or nothing at all. What can you see?

This would make a wonderful hymn to sing at the beginning of Mass, at offertory, or as a recessional during the month of August and for the Feast of the Assumption. At St. Mary’s where I grew up and sang in the choir for more than thirty years, we didn’t wait for a feast day to arrive to honor Mary, she was our patroness and the Mother of God, so we honored her with hymns on most Sunday’s throughout the year. Be spontaneous and see what graces and help will come from Our Blessed Mother when you express your love for her through hymns.

On another note, Father Cummings is sometimes credited as the author of the hymn Immaculate Mary, Thy praises we sing. This is FALSE. This hymn first appeared in the CANTATE OMNES Catholic hymnal published in 1952 and the words are by an unknown author or editor. The hymn was offered as a substitute for the beloved Marian hymn Immaculate Mary, Our hearts are on fire. This brings to mind an interesting narrative I read in the Introduction to the PEOPLE’S HYMNAL published in 1955 by THE HYMN COMMITTEE of THE THEOLOGICAL COLLEGE, Washington, D.C., Catholic devotion, as the Church takes care to emphasize, should represent, not what we would wish to feel, but what we actually do feel. There is no need for saying that our hearts are on fire when really, they are not.

Hmm…We’re not our hearts burning inside us as he talked to us on the road and explained the Scriptures to us (Luke 24:32)

A beautiful Harp solo of Sister Mary Alexis Donnelly’s composition and many of her other compositions can be found by visiting The Devotional Hymns Project website produced by Peter Meggison.

Below is a selection of the melodies composed for the hymn Hail! Virgin of Virgins described above. These are computer generated sound files. The tempo is approximate but should provide the listener a good sense of what the hymn sounds like. All the hymns are in the public domain. Music directors, if you use any of these selections in your Sunday or weekly music programs and you make a recording, contact the author and I may feature it in the What’s New section of the website. 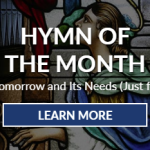 Bring Flowers of the Rarest