Eliza Allen Starr (1824-1901) wrote the words of this hymn in 1866, and they appeared in her collection of Poems published by H. McGrath of Philadelphia in 1867. The poem was captioned The Holy Name of Jesus. Eliza was a prolific poetess, art teacher, and lecturer. She grew up in Deerfield, Massachusetts, and studied art in Boston. She taught art in Brooklyn, Philadelphia, and Natchez, Mississippi, and under the auspices of Archbishop Peter R. Kenrick (1806-1896), she joined the Church of Rome in 1854 at the old Holy Cross Cathedral in Boston.

In 1856, Eliza moved to Chicago where she remained for the rest of her life devoting her time to authoring poems, teaching art, and giving art lectures and courses at schools and academies throughout Chicago. In 1876, her career as an artist took her Italy, France, and England; and in 1885, Notre Dame University conferred upon her the Laetare Medal, she was the first woman ever to receive this prestigious award.  In 1893, she received a gold medal from the World’s Columbian Exposition also known as the Chicago World’s Fair, as an art teacher. Pope Leo XIII honored Eliza in 1900 with a cameo medallion as a mark of his approbation of her literary labors.

Eliza was the author of Patron Saints, Pilgrims and Shrines, Songs of a Life Time, Isabella of Castile, Christian Art in Our Own Age, Christmas-Tide, The Seven Dolors of the Virgin Mary, and Three Archangels and the Guardian Angels in Art. A short biographical sketch of her life was published in the 1893 Woman of the Century – Leading American Women by Frances Willard and Mary Livermore. Also, in the Who’s Who in America, 1901/1902 by John Leonard. Eliza was a well-respected author and art critic known throughout America and Europe.

She was also the author of the hymn, O Face Divine! found in the HOLY FACE HYMNAL, 1891 with music composed by Sister Mary Alexis Donnelly of the Sisters of Mercy at St. Xavier’s Convent, Providence, Rhode Island. Sr. Mary Alexis Donnelly was one of the major contributors to American Catholic music in the late 19th and early 20th century period. Eliza never married and later in life she joined the Third Order of St. Dominic. She died at the age of seventy-seven after a short illness while visiting her brother in Durand, Illinois. She was buried at Calvary Catholic Cemetery in Chicago wearing the Dominican habit.

The earliest that Sweet Name Which Makes the Dying Live appears in any Catholic hymnal is in the ST. BASIL’S HYMNAL, 1904 8th ed., and it continued to appear in later editions until 1925; also SELECTED HYMNS ca. 1926, Church Academy School, published by Angel Guardian Press, Jamaica Plain, Mass; It also appeared in the ST. JOSEPH’S HYMNAL, 1930 compiled by the Sisters of St. Joseph in Nazareth, Michigan; the SAINT ANDREW HYMNAL, 1945 compiled by Philip Kreckel and published by McLaughlin & Reilly Co.; the HOLY NAME HYMNAL, 1947; and in the PARISH HYMNAL, 1954 of St. Francis Church, Cleveland, Ohio.

Two melodies have been located for this hymn, a melody composed by a Sister of Mercy from St. Xavier’s in Chicago, and a melody found in the JUBILEE HYMNS BOOK, 1942 compiled and composed by Monsignor John Edward Ronan (1894-1962). The Jubilee series of hymn books were published in three volumes between 1942 and 1952 in Toronto, Canada.

On the authority of the Mercy Heritage Center archivist, very few records of the sisters exist before 1929. In many of the former provinces, researchers/archivists have gone back and recreated files for historical sisters. However, this was not done in Chicago. This brief account of the sisters and their musical talents is taken from the sources listed below.

The identity of the Sister of Mercy who composed the melody that is traditional to this hymn remains a mystery yet there are a few who are worth mentioning because their musical abilities were well known among the sisters.

The Sisters of Mercy were quite influential in setting up schools and hospitals in and around the Chicago area. The Motherhouse was opened in 1846 and St. Xavier’s Academy in 1847. Mercy Hospital opened a few years later in 1851. Their nursing skills were called upon during the Cholera epidemic of 1854 and 1873, and during the Civil War they were summoned by Colonel Mulligan, who had organized the Irish Brigade and were placed in charge of the Jefferson City Hospital and the steamboat Empress. Many of the soldiers from both sides were still on the battlefield in tents deprived of every comfort, while suffering from wounds of every description. The steamboat Empress made many trips with suffering soldiers ferrying them to better care facilities including Pittsburg Landing near Shiloh, Keokuk in Iowa, Louisville, and St. Louis.

The great Chicago fire of 1871 which destroyed much of the city also destroyed the convent, boarding school and the Academy located on Wabash and Madison streets. Only small items which the sisters could carry out and some religious paintings cut from their frames were saved. Everything else was lost in the fire. The sisters were homeless. Mercy Hospital which had only recently been expanded survived and was soon over flowing with patients. The sisters saw to the needs of thousands of individuals, attending to people in numerous ways, the severely burned and those so covered with smoke and soot that they could not tell black from white or who was who. In a single night more than one hundred thousand people were rendered homeless.

There is much more that could be written about the Sisters of Mercy and their great accomplishments and trials in Chicago, but this is beyond the scope of this short write-up. A fascinating history of the Sisters of Mercy of St. Xavier’s can be found in the REMINESCENSES OF SEVENTY YEARS (1846-1916) published in 1916 by The Fred J. Ringley Co., of Chicago as well as the LEAVES FROM THE ANNALS OF THE SISTERS OF MERCY, published between 1881 and 1889, and the ILLINOIS CATHOLIC HISTORICAL REVIEW published in 1920.

Monsignor John E. Ronan composed the second melody. John Ronan was born in 1894 and studied music at St. Michael’s College in Toronto. He was drawn to the priesthood completed his seminary studies and was ordained in 1922. He continued to study church music in New York, Paris, Rome, Vienna, and Munich. He would go on to become a prolific composer of sacred music. He taught music in Catholic schools in Toronto and in time established the St. Michael’s Cathedral Choir School for boys in Toronto. In 1947, Father Ronan was given the title of Monsignor in recognition of his dedicated work in sacred music.

Though many of his compositions are unpublished more than nine hundred of his hand written manuscripts were discovered, catalogued, and digitized. Monsignor Ronan continued to teach music and served as principal of St. Michael’s Cathedral Choir School until his death in 1962.

St. Mary’s Choir sang this hymn at my grandfather France’s funeral as the recessional hymn when the funeral procession leaves the church and heads to the final resting place. Grandpa France died in March 1957 of a fatal heart attack while working for McNeil Machine & Engineering Co., in Akron, Ohio. I remember being told that grandpa died praying the rosary. He worked in the tool crib and often many hours would go by that no one signed out any tools and so he would pray his rosary. On this particular day I am also told that before going to work he and grandma had a disagreement about something, and heated words were exchanged between the two of them. I would like to think grandpa was praying the rosary that morning for any harsh words or remarks he may have said to grandma.

My grandfather was born in 1895 and raised Methodist and my grandmother was raised Catholic. He married my grandmother on April 17, 1917 in the Methodist church on North Arlington Street, Akron, Ohio and six months later after grandpa joined the Catholic Church they were married in St. Joseph’s Church in Cuyahoga Falls, Ohio. My grandmother was a wonderful Catholic woman, a mother of eight, and a foster-mother to twenty-eight children.

I remember being told that grandpa played the violin and grandma played the piano, and that they would often play together at home sharing hymns and songs that each of them knew. I wish I had known my grandfather, because from the stories I have heard, he was quite the character, but he died a year before I was born. Grandpa was also a member of the Holy Name Society at St. Mary’s in Akron, Ohio.

I learned the melody from ST. BASIL’S HYMNAL when I sang in St. Mary’s Choir (1977-2010). I really love this hymn and would like it to be the hymn the choir sings at my funeral. Every time I hear it the melody and words linger with me all day long and sometimes into the next day.

There are many poetic images from the bible in these verses, how many can you find?

The hymn is also a prayer, O Mary, teach me to pronounce that name of names most dear, and softly bend adoring head, when Jesus name I hear. This would make an excellent hymn to sing during November, for All Souls Day, and anytime a loved one is remembered.

In addition to my anecdotal evidence, there is other proof that this hymn and others were used at Catholic Requiem Masses either before Mass, when the funeral procession enters the church (ex., Sister Mary Rose – The Catholic Transcript, Thursday 3-24-1932, pg.7); as a recessional hymn (ex., Mary Gertrude Drumright – Drumright Evening Derrick, Monday 1-24-1921, pg1); and at the grave side (ex., Blazius Brozozowski, The Gonzales Inquirer 5-28-1931, Find-a-Grave); also (Daniel Daley Jr., The Lusk Herald (Lusk, WY), Thursday 2-27-1936, Niobrara County Library);  Other evidence was located in the Oshkosh Daily Northwestern (Oshkosh, Wisconsin) February 15, 1938, and August 17, 1953; however these obituaries were only available with subscription.

Other hymns were also listed in the evidence above including Miserere, Pie Jesu, Lead Kindly Light, Be Comforted Ye that Mourn, O Salutaris, Face to Face, Heaven is His Eternal Home, O Thou Sacred Heart, O What Could My Jesus Do More, and Nearer, My God to Thee – with verses written to honor the Sacred Heart of Jesus.

Though these funeral accounts highlight prominent citizens of some stature and one religious it does show that the hymn Sweet Name Which Makes the Dying Live was used at Requiem Masses throughout Catholic parishes in the United States during the first half of the 20th century.

A special thank you to Peter Meggison producer of the Devotional Hymns Project for allowing me to link to the choir of St. John the Guardian of Our Lady from Clinton, Massachusetts. Please take a moment to listen to this beautiful collection of hymns and the wonderful hymn Sweet Name Which Makes the Dying Live.

Below are the melodies composed for the hymn Sweet Name Which Makes the Dying Live. These are computer generated sound files. The tempo is approximate but should provide the listener a good sense of what the hymn sounds like. Music directors, if you use any of these selections in your Sunday or weekly music programs and you make a recording, contact the author and I may feature it in the What’s New section of the website. 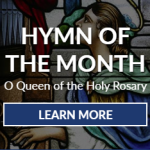 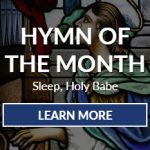 Mother of Mercy, Day by Day